Reasons why Proton X50 is worth the wait 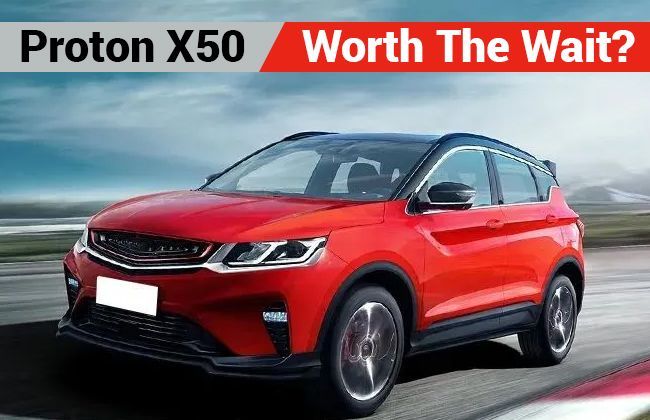 Proton has been on a launch spree with five new models launched last year including Iriz, Persona, Proton Saga facelift, Exora and the all-new X70.

For this year, Proton has a couple of models under its sleeve including the new X50, which will enter the sub-four meter SUV space to compete with Ford EcoSport, Honda HR-V, and Toyota CH-R. It will take the Proton, Perodua rift further as latter is also prepping to launch a small SUV, christened D55L which is expected to go on sale sometime towards the end of this year.

While the sub-four meter space is filled with noteworthy models, the upcoming X50 is expected to be on par with rivals in the segment, and account for a large chunk of the pie. Coming from the stables of Proton, we expect it to offer great value at reasonable pricing and much more. Meanwhile, the details on the X50 indicate the small SUV will offer a good mix of features and a powerful engine. While there is a lot more to look up to in the upcoming model, here are some reasons why we think X50 is worth the wait.

Let us first go through the expected Proton X50 specs and engine details (estimated) before we look into the other details.

Based on the Geely Binyue, the Proton X50 is expected to borrow the 1.5-litre unit from its donor model. It will come linked to a 7-speed DCT gearbox. The Geely Binyue also comes with a 1.0-litre, three-cylinder turbocharged unit in the Chinese market, though this unit will not be offered on the X50.

While there is still some time for Proton X50 launch in Malaysia, rumors have started doing rounds about the Proton X50 price. It is, however, a bit premature to speak of it, the estimates suggest Proton could launch X50 at a base price of RM 75,000. Moreover, the SUV will be assembled locally in Malaysia and will be available as a completely built unit.

Even though X50 is conceived on Geely, it will take styling cues from elder sibling X70. It will also sport some original elements to distinguish it from its donor model. Styling elements such as infinite weave grille will be borrowed from the X70. Overall, the compact SUV will have a sporty, rugged appearance and an aggressive stance just like other SUVs in Proton’s line-up.

Despite belonging to the sub-four meter segment, X50 is expected to feature a spacious interior with a comfortable space for five occupants. In terms of room, both front and rear will have enough room for the passengers. Besides, Proton will pack a bunch of comfort and connectivity aides for passengers’ convenience. Sporting a dual-tone color theme, the cabin will benefit from dual-zone climate control, a three-spoke steering wheel with mounted controls and a fully digital and colour instrument console among others.

The talking point inside will be a large 10-25-inch infotainment unit which will run on the Geely Key User interface. The voice commands or voice control functions on the infotainment unit would be easy to operate by just saying ‘Hi Proton’. While smart connectivity features such as Apple CarPlay and Android Auto will not be a part of the pack, it would come with provisions to connect smartphones with the system.

This feature is usually available with premium models, though we hope to see it in the upcoming X50. It is however not clear if it will come with mid-spec variants or if it will be restricted to the fully-loaded top-spec variants only. With the panoramic sunroof on the feature list, the Proton X50 will have an edge over rivals in the segment.

The 1.5-litre unit from Geely will power the X50, calibrated to churn out a peak power of 176 PS against top torque of 255 Nm. This is a lot of power considering the size of X50. Also, this unit will help X50 deliver a smooth performance. A seven-speed DCT is likely to be paired with the 1.5L engine.

As mentioned in the beginning, the X50 price is likely to begin from RM 75,000 which will give it a cusp over competitors in the sub-four meter SUV space. The model will be locally assembled in Malaysia and will help Proton curb pricing, thanks to heavy localization. However, it remains to be seen how Perodua is going to price D55L, its closest rival, which is also set to launch in November this year.

With the above features on offer, we expect Proton X50 to set the cash registers ringing right from day one.

Proton X50 Alert me when launched