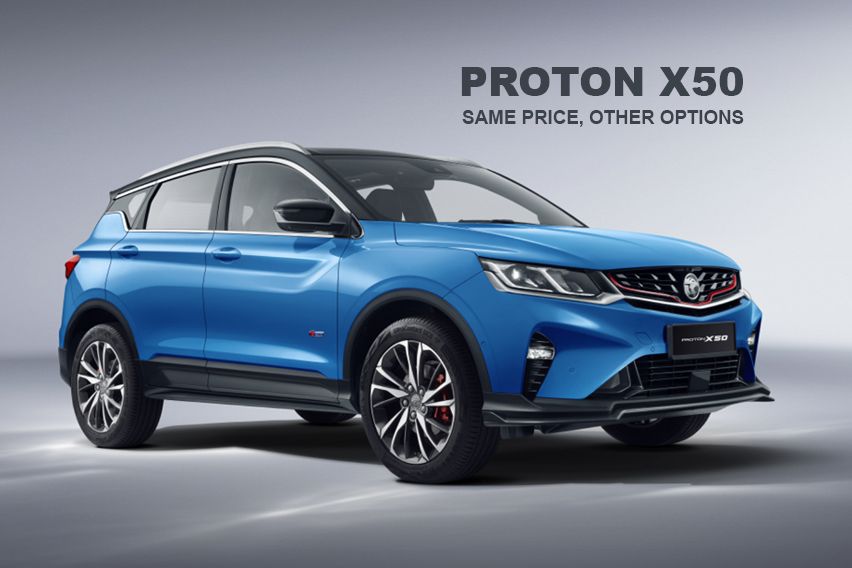 Proton has finally launched the long-awaited X50 in Malaysia and that too at an attractive price tag. The crossover SUV has everything up its sleeve and woos the customers with its lengthy and hi-tech feature list, stylish design, and powerful performance. Before its launch, Proton claimed that the SUV had received 20,000 bookings, double the pre-launch reservations of its X70 received in 2018. Well, riding on the strong revival momentum brought by the X70, the automaker strikes even harder with the all-new X50. Check full details on the SUV here.

The Proton X50 price ranges between RM 79,200 - RM 103,300. Positioned in the B-Segment SUV category, it is very competitively priced among its direct competitors, which include:

But in today’s story, we spotlight the options, which you can buy in the Proton X50 price band.

If you are looking to buy the Proton SUV and don’t really want to go for a lower variant, there are another type of SUVs you could look at; the sub-compact SUVs. These have been in demand just like their bigger siblings. Ford EcoSport is one such SUV that made its debut six years ago in the country and has proved its mettle with its beefy looks and value-for-money stature. Available in two variants- Trend and Titanium, the EcoSport is a wonderful car, inside and out that comes with a really attractive package for first-time customers or the ones who are looking to upgrade from a small hatchback.

Another option in the same price bracket is the Honda BR-V, which is a compact crossover SUV with a seating space for 7 passengers. The SUV has been an immense hit due to its styling, comfortability, and adaptable driving experience. Built on Honda’s stretched Brio underpinnings, the SUV comes in two variants - E and V, which can impress the buyers finding a companion for daily commutes, family outings, or even a business. Falling in the Proton X50 price range, the Honda BR-V seems to be ideal for all those needs.

Toyota’s 7-seater MPV, the Rush also lies in the same price band, which is a perfect blend of an MPV and an SUV. Just like the BR-V, the key highlights of the Rush are its styling, equipment and features, and of course its Toyota badge. Available in two variants - 1.5G and 1.5S, Toyota Rush is a mate you would love to have along with in the city as well as in the countryside.

In terms of price, the Proton X50 also rivals some highly popular players of the B-segment sedan category, including the Honda City, whose fifth-generation model launch is around the corner. Known for its dashing looks, practicality, and spaciousness, the 2020 Honda City will be available in four variants, including the all-new RS variant based on the new intelligent multi-mode drive (i-MMD) hybrid powertrain. The said configuration is capable of generating a class-leading torque of 253 Nm (more than Toyota Camry). It will also have some first-in-class safety features. All the new technologies will surely increase the upcoming City’s price, but still, it will be lying in the X50 price range.

Nissan Almera is also one of the well-liked B-segment sedans in the Malaysian market that is available at the same price point. Nissan has recently revealed the price of the all-new Almera Turbo, which is remarkably different from its predecessor in terms of design, powertrain, and features. The new Turbo engine accelerates instantly and thus reduces turbo lag impressively. It features Mirror Bore Coating Technology for less internal friction and engine knocking and better cooling performance. It comes in three variants - VL, VLP, and VLT.

Surely, all the above options are equally impressive in their own way, consider these if you are looking for a new car around the mentioned price bracket and feeling dicey about the Proton X50.